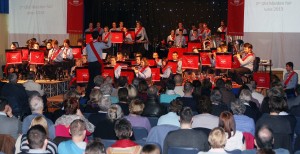 It was smiles and celebrations all round on 7th December at the Kingston and Malden Scout and Guide Band’s Annual Awards Ceremony and Concert, held at Tolworth Girls School. Rory Dunne (17) an Explorer Scout with the Voyager Unit once again scooped the top award of Band Member of the Year. This recognised his 100% commitment to band activities as well as his abilities on the Baritone in the last 12 months. More recently Rory has had a go at conducting too! Every year, the Band’s youth membership itself considers who they think has been their top role model. 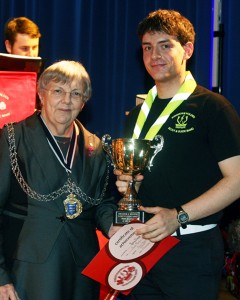 This year one of our younger members; scout Alex Finnie (11) came out first in the vote and was awarded “Band Members’ Choice for Band Member of the Year”.

Other awards for service, turnout and progress were presented to members of the Band on Saturday at their concert, which was also attended by the Mayor of Kingston, Councillor Penny Shelton and representatives from local Scout and Guide counties. A musical highlight of the evening was the Band’s first performance of a medley of pieces from Les Miserables. The Band also enjoyed recreating the fun element of the Illuminated Parade in the Isle of Wight from the Summer of 2013, when they put on their scarves and head torches for the second half of the Concert! Commenting on the evening, Cllr Shelton told a packed house of over 200: “what a wonderfully entertaining evening with a group of young people who are such great ambassadors for the Royal Borough.”