Wow – what a night! Our annual awards night is a chance to celebrate the achievements of our young people and it was pleasure to have 38 on stage supported by 18 adult helpers and instructors – a total of 56 playing members (with a few more unable to to be with us due to university or other Scouting commitments!).

During the evening we entertained our audience of local dignitaries, representatives from the Scout and Guide associations and parents and friends to a selection of our favourite pieces from 2015 including medleys from Michael Jackson, Disney films and James Bond. Our very newest members even performed the very topical Imperial March from Star Wars!

The awards themselves are the evening’s main event, and it was great to recognise players of the year from each section, first year progress and drill and turnout plus the coveted bandmember of the year awards.

In addition, the evening provided the chance for last year’s Mayor, Councillor Ken Smith with Deputy Mayor Cathy Roberts, of the Royal Borough to present cheques to the local Scout and Guide organisations in Kingston; this money was raised through the Mayor’s Charity of which K&M were proud to support several events. 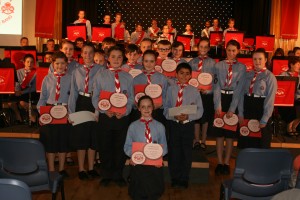 Our newest members with their service certificates!

Make sure to join us next on Saturday 3rd December! 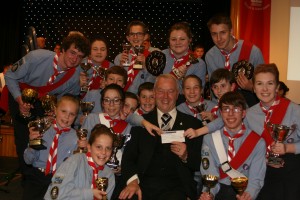 Some of our award winners with last year’s Mayor Councillor Ken Smith with a cheque to local Scouting for over £6,000!

← X Camp A summer weekend on the Isle of Wight →